PlantStand is a hub created to bring about a frictionless gateway to the plant-based food movement through empowerment and community, a gateway to help people overcome the difficulties that arise with transitioning to a plant-based diet and to reduce the barrier to entry around this transformation.

We aim to help people find their path, without shame or negative reinforcement.

Our goal is to give people who have had difficulties reshaping their dietary habits in the past a way to enact real change and find a home in a plant-based diet, or to simply eat less meat if that’s the desired option.

PlantStand supports this growing community by providing a place online to be inspired, motivated and enabled. You’ll get access to ebooks, meal plans and other resources, along with opportunities to hire coaches and mentors who have proven experience moving people easily and efficiently to their desired lifestyle.

Our hope is to help connect and vitalize the plant-based community with an overall spirit of wellness so that it can continue to make its way into the popular cultural imagination.

Thousands of people have happily made the changes to adopt this diet, and are seeing the results. 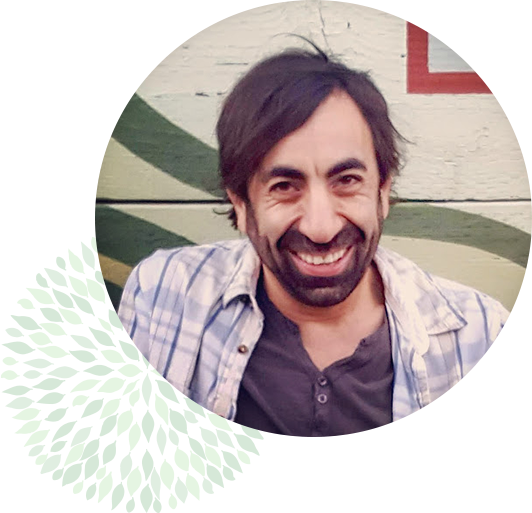 In the winter of 2000, I began to feel some very strange sensations in my body that I discovered, after visiting the hospital, were symptoms of Multiple Sclerosis (MS). I was diagnosed a few weeks after.

Over the next dozen years or so I tried various therapies to help prevent future relapses of the disease, and even though they proved effective at keeping my condition stable, the routine injections of the medication and all the side-effects that came with it had me looking for a better way.

In early 2017, I began working with an integrative medicine doctor who educated me on the role inflammation plays in autoimmune diseases like MS. She told me inflammation can be controlled and even eradicated with a non-meat, non-dairy, non-gluten diet, which if used correctly might even double as a therapy to combat MS. It couldn’t hurt to try it.

The transition was difficult and plagued with false starts but with diligence and support I soon converted to a fully vegan diet.

Going vegan was one of the hardest but best choices I have ever made for myself. I discovered that a plant-based diet leads to better health, a sense of total mental and body well-being, and as an added bonus, a more sustainable food industry for a world looking toward an unpredictable environmental future.

I’m extremely passionate about the cause and am fully convinced the plant-based food movement will generate one of the most impactful changes in human behavior we have seen in our lifetime.

I decided to take it upon myself to help further it with the PlantStand project. I hope you’ll join me!

Forgot Password
Please Login
We use cookies on our website to give you the most relevant experience by remembering your preferences and repeat visits. By clicking “Accept All”, you consent to the use of ALL the cookies. However, you may visit "Cookie Settings" to provide a controlled consent.
Cookie SettingsAccept All
Manage consent

This website uses cookies to improve your experience while you navigate through the website. Out of these, the cookies that are categorized as necessary are stored on your browser as they are essential for the working of basic functionalities of the website. We also use third-party cookies that help us analyze and understand how you use this website. These cookies will be stored in your browser only with your consent. You also have the option to opt-out of these cookies. But opting out of some of these cookies may affect your browsing experience.
Necessary Always Enabled
Necessary cookies are absolutely essential for the website to function properly. These cookies ensure basic functionalities and security features of the website, anonymously.
Functional
Functional cookies help to perform certain functionalities like sharing the content of the website on social media platforms, collect feedbacks, and other third-party features.
Performance
Performance cookies are used to understand and analyze the key performance indexes of the website which helps in delivering a better user experience for the visitors.
Analytics
Analytical cookies are used to understand how visitors interact with the website. These cookies help provide information on metrics the number of visitors, bounce rate, traffic source, etc.
Advertisement
Advertisement cookies are used to provide visitors with relevant ads and marketing campaigns. These cookies track visitors across websites and collect information to provide customized ads.
Others
Other uncategorized cookies are those that are being analyzed and have not been classified into a category as yet.
SAVE & ACCEPT
What is the PlantStand Community?

The PlantStand Community is a group of people just like you. People who want what’s best for their health and their future, and are committed to making that happen.

They know that the best way to transform ourselves is with support. And we are here for you too.

The plant based food movement is renewed and empowered through other like-minded people. People who become the gateway to overcoming the difficulties that arise when moving towards a plant-based diet.

The names here are a support line, a way to keep moving.

BE A PART OF THE PLANT-BASED COMMUNITY

The Daily Inspiration is three unique snippets of useful information designed to inform and inspire you just when you need it most: every day!

The sections are defined this way:

Head: Plant-based lifestyle related. Ready to build into your day.

Heart: Spirituality and wellness related. Take a deep breath and listen to your inner voice.

CHECK BACK TOMORROW FOR A NEW ROUND OF INSPIRATION

“Throughout human history, all large, successful populations of people have obtained the bulk of their calories from starch.”

Ginger root has been valued for thousands of years both as a versatile cooking spice and a trusted herbal remedy for nausea,

headaches and joint pain. A close relative to turmeric, ginger has similar antioxidant and anti-inflammatory effects – and may even

activate the molecular mechanisms that cause cancer cells to extinguish themselves.

In one study, ginger inhibited the growth of breast cancer cells while leaving normal cells unharmed, a process known as selective cytotoxicity.

A University of Minnesota animal study showed that gingerols, a group of compounds found in ginger, resulted in 75 percent fewer tumors and smaller tumor sizes.45 While more study is needed, many scientists believe that ginger can inhibit many types of cancer – including breast, prostate, colon, liver and lung.

Add fresh or powdered ginger root to recipes, mince fresh ginger to use in a tangy salad dressing, juice it into an energizing “ginger shot” or even steep it into a refreshing tea. No matter how you “slice” it, this sweet and spicy herb should be part of your cancer-protective regimen.